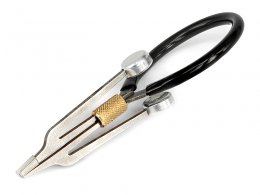 The hackle pliers are used to make it easier to wrap the feathers around the stem of the hook without the risk of breaking them.