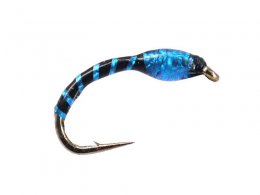 In many lakes, chironomides (also called buzzers or midges) are present in large quantities and, in the larva stage, are often the main food for trout and whitefish.
Trout and whitefish feed on both the chironomide larvae, which are located near the bottom, and their pupae which are ascending towards the surface.
The larvae and chironomid pupae present in our latitude, usually have dark colours such as black, brown and olive, but also variations of red. In the pupa stage, they often have an oval-shaped thorax.
The chironomes open from the beginning of spring, when the lakes are thawing and it is still very cold, until the beginning of summer (depending on the area). But spring is the best time to fish with chironomid nymphs!